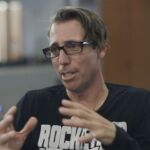 John Gaeta first got into virtual reality when he was approached by the Wachowski siblings to be the visual effects supervisor on The Matrix. Now he’s Executive Creative Director of Industrial Light & Magic’s Experience LAB (ILMxLAB) where he’s designing and enabling platforms that will lead to the Matrix — “minus the machine dominance” of course. ILMxLAB has a decade of story to explore within the Star Wars Universe using the latest virtual and augmented reality technologies. I had a chance to catch up with John at Sundance where he talked about collaborating with a dream team of storytellers, technologists, and theme park designers to create immersive entertainment experiences. We talk about the evolution of passive and interactive storytelling, crafting tribal social VR experiences, and the importance of including humanity and emotion within a medium that can otherwise feel isolating.

Here’s a summary of the work that ILMxLAB has been doing, and it features a lot of footage of their CAVE-like Holo-Cinema system that can be used to preview virtual environments and create interactive experiences:

ILMxLAB’s Rob Bredow was at Oculus Connect 2 where he presented a graphic that a showed a spectrum of immersive experiences across the two axes of Pre-Rendered vs. Real-Time and Passive vs. Interactive:

The range of storytelling opportunities in #VR by @ilmxlab @rbredow #oc2 pic.twitter.com/zsLjr1xhPE

This shows that ILMxLAB’s perspective that there will be a range of interactivity within narrative experiences that are perspective, then a hybrid of plates and CG or backgrounds will be added, and then move to multi-point navigation within a CG environment, and finally there will be navigable movies with parallel stories rendered in CG. On the real-time end of the spectrum, it starts with real-time shorts, and then dynamic characters will be added, progressing to touch navigation and casual interactions for a single user, and then finally to 3D navigation with complex scenes that are modifiable by multiple users.

In the end, John Gaeta is the really interested in adding social elements to ILMxLAB experiences with real-time human interactions, and so he’s been quietly visiting many social VR platforms and has given a talk in ConVRge complete with a lightsaber dance party. ILMxLAB has been collaborating with Disney Imagineers in order to help create experiences that are meant to be done with a small tribe of friends and family. While John is impressed with the technical wizardry that can be demonstrated in VR experiences, he believes that interactions with other humans and stories with human emotion are going to be key for the virtual reality medium and immersive storytelling to really take off. In the meantime, ILMxLAB will be continuing to experiment with augmented and virtual reality and is interested in collaborating with content producers who have unique ideas for how to best use these new immersive platforms.