InfinitEye is a prototype head mounted display that uses dual 1280×800 displays to create a massive 210 degree field of view. I traveled to Toulouse, France to be the first journalist in the world to go hands-on with the unit. These are my thoughts on the trip, the team, and the HMD itself.

An Englishman in Toulouse 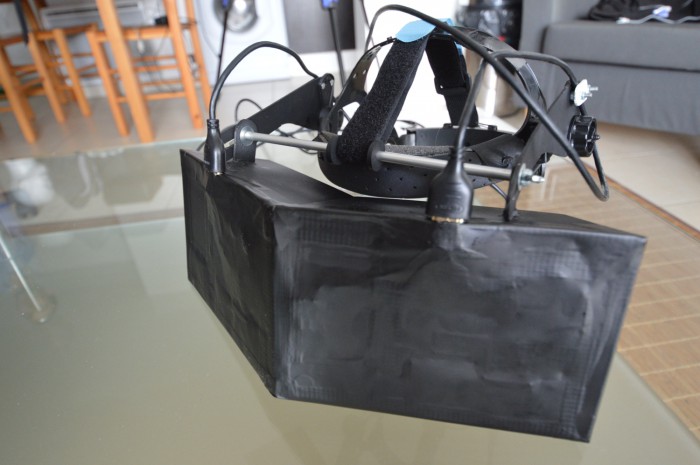 Take Me To the Videos

It’s been a little over 12 months since I began writing publicly about virtual reality and if you’d told me then that I’d be flying around Europe, getting to meet the leading lights in this fledgling industry and to witness the birth of so many incredible firsts along the way, I doubt I’d have believed you. Nevertheless, here I was winging my way to the historic city of Toulouse to met the talented trio behind what some believe is the first real competitor to the now mighty Oculus Rift.

If that all sounds a little too romantic, it is. In reality I was on a redeye, struggling to stay awake following a 6 hour drive and the world’s worst sleep ever. In a fit of unusual optimism (I’m British after all) I’d arranged to do the trip in one day, an itinerary I’ll not be trying to replicate any time in the near future.

Greeting me at the Airport was Project Manager Stephane Portes and Developer Lionel Anton, and upon seeing my zombie-esque condition, frankly they must have wondered what they’d agreed to. Nevertheless, a few minutes later we were chatting opposite the grandiose Capitole de Toulouse, sipping fresh orange juice. Joining us there was the third and (so far) final member of the team, Developer and ”3D Expert” Robin Bourianes. All three members have been friends for over a decade and this is not the first time they’ve collaborated on a project.

The InfinitEye was Lionel’s idea, a product of many hours of tinkering in his spare time. Stephane exclaims “I’ve been trying to push him [Lionel] for years”, highlighting his own personal belief that his friend was onto something rather special. By that of course he meant, refining the design, developing an SDK, seeking funding, and perhaps even investigate the possibilities of a commercial product based on the idea.

This brings us to juncture where most people first heard of the InfinitEye, at least those not frequenting specialist forums such as MTBS3D. The team entered a Samsung Entrepreneurial Funding Contest which promised €100,000 to the winner. Despite being publicly voted into the top five finalists, Samsung decided to not pick any of the finalists. As you can imagine, it knocked the wind out of their sails a little. But the campaign they ran in order to get the votes brought their project to the attention of many more people. The genie was out of the bottle.

…is the best phrase I can come up with that summarises the InfinitEye’s capabilities. If using the Oculus Rift is like opening the sunroof on a virtual world, the InfinitEye takes the roof clean off—at least if you base your opinion solely on horizontal FOV. But the new HMD also offers 1280×800 per eye in comparison the current Oculus Rift Dev Kit’s 640×800 (and only slightly fewer pixels per eye than the Oculus Rift HD prototype), the benefits of which should be obvious. What’s been more controversial is the use of Fresnel lenses to achieve the astronomical FOV. Rejected by some as problematic, the debate on whether they offer a viable alternative to Oculus Rift style aspheric lenses is complex, and we’ll be covering this in a forthcoming technical exploration including answers to your questions.

For now though, we present three videos filmed during my day with the InfinitEye team, each video is my realtime impressions whilst experiencing the application in question. The applications show a good range of the HMD’s abilities and I hope my slightly dazed ramblings give you some idea of what to expect should this device ever become a reality.