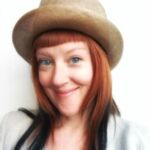 Funomena’s Woorld won the ‘Best AR Experience’ category at the recent 2017 Google Play awards. In the game you scan your room with a Google Tango-enabled phone, and then you’re encouraged to decorate your space with extremely cute art and characters designed by Katamari’s Keita Takahashi. Part of the gameplay in Woorld is to figure out how to combine different objects together in order to unlock new objects and portions of the story in your space. Funomena had to innovate on a lot of augmented reality user interaction paradigms and spatial gameplay in designing this game. I had a chance to catch up with Funomena co-founder and CEO Robin Hunicke at Google I/O to talk about her game design process, as well as her deeper intention of bringing sacredness, mindfulness, calmness, worship, spirituality, love, empathy, and kindness into your environment through augmented reality technology. She takes a lot of inspiration from Jodorowsky’s The Technopriests as well as the sci-fi novel Lady of Mazes by Karl Schroeder.

Hunicke also sees that there’s a split that’s emerging between the commercial VR and the indie VR scene with the character of content that’s being funded, and she talks the importance of supporting indie game creators.