VR represents a shift from telling stories to building story worlds that people experience and interact with. There is a process of world building and experiential design that first creates the conditions of the environment, and then the full context of that world helps to drive the narrative design of the stories that can be told within it. This process of building futuristic, sci-fi worlds requires a holistic understanding the co-evolution of technology and culture that takes a lot of imagination to visualize solutions to intractable problems embedded within the fabric of this new world, and then to imagine what new and even more complicated problems will have been created in that future. Monika Bielskyte of All Future Everything is a digital nomad who travels the world searching for the latest technological and cultural innovations so that she can build these sci-fi worlds imagining the cultural and technological context of the near-future for the entertainment industry, technology companies, and even urban planners and politicians from governments and cities. 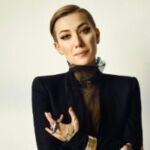 Bielskyte is critical of a lot of the status quo of Hollywood sci-fi blockbusters who tend to be self-referential to other movies and media rather than curating the latest innovations in tech and culture that is already happening around the world at small scales. She has a vision of the future culture that is post-race, post-gender, post-nationalities, but also has more holistic representations of diversity, a regenerative relationship with the environment, robust expressions of cultural creativity and hacking reality, an accurate representation of youth culture and fashion, moving beyond mid-20th century gender, family, and sexuality stereotypes, and imagining how the values of our culture can evolve beyond passive consumption to participatory experiences with spatial computing.

A lot of the existing sci-fi worlds builders have not thought about all of these dimensions of potential future iterations of culture, but rather resort to the lowest-common denominator: dystopic visions of ecological disaster and tyrannical thought control.

Technology and culture are in a continual process of evolution, and as a world builder Bielskyte finds an endless stream of inspiration and innovation that is happening in the real world. She cites artists like Yijala Yala, FKA Twigs, Sevdaliza, Solange, Alma Harel, and M.I.A. as being more progressive or innovative than representations of the future culture in blockbuster sci-fi films like Blade Runner 2049. Part of being a sci-fi world builder means curating innovative technologies or ideas that are happening at small scales, and then projecting out the implications of these cultural currents at larger scales.

I caught up with Bielskyte after she posted a tweet storm critiquing the regressive and dystopic future depicted in Blade Runner 2049. We talked about her work and process of designing the future, and the ethical responsibilities of world builders for putting awe-inspiring representations of the future into the world.

She notes the cultural differences of how people from the West tend to think individualistically about the future, and how the hero’s journey, monomyth narrative design tends to reflect a similar arc of the expression of individual agency. But part of the unique affordance of VR is that it can start to explore at the complex interconnected aspects of our reality through the process of sci-fi world building, and start to put more of an emphasis on the collective journey of the community coming together to solve these huge problems. She sees VR as a “possibility space” that can be used to actually design the futures that we want to live into.