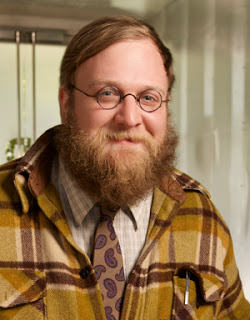 Adventure Time creator Pendleton Ward has been fascinated by the idea of virtual reality since he first read Snow Crash as a teenager. He backed the Oculus Kickstarter, and has been exploring many of the early VR prototypes over the last three years and started to create interactive stories. Little Pink Best Buds has some VR components and was created as a part of Double Fine’s 2-week Amnesia Fortnight game jam in 2014. Pen is currently exploring the bounds of identity in VR through a new adventure game and story that he’s working on, and he’s been taking inspiration from many different early VR prototypes but especially the out-of-body experiences he had in Robin Arnott’s Sound Self VR experience.

I had a chance to catch up with Pen at SIGGRAPH where he talked about Sound Self, contrasting his ability to express identity in real versus virtual spaces, how VR allows him to get out of his head, recreating a scene at the Black Sun virtual nightclub from Snow Crash, his explorations in social VR, and where he sees the metaverse is heading.

For more information about identity in VR, then check out my interview with Mel Slater, who is one of the leading researchers in exploring presence and virtual identity. I’ve also interviewed a couple of Mel’s students including Domna Banakou and Nonny de la Peña who have both explored the virtual body ownership illusion.

Here’s Pen’s pitch video for Little Pink Best Buds, which was the experience that was selected on to be made as part of Double Fine’s Amnesia Fortnight 2014.

And finally, here’s a couple of cartoons about VR from Pen as well as a Tilt Brush drawing he made using a ladder:

"personal bubble" shields seem like an important feature to prioritize in these early days of social-VR pic.twitter.com/Afbp8MxLJq

VR needs to be on street corners for people to know! pic.twitter.com/VUo4rx364B High Fidelity is Architecting for VR Privacy with Self-sovereign Identity