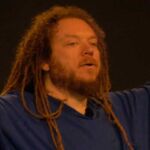 Jaron Lanier is a pioneer of the first commercially-available virtual reality systems with his VPL Research Inc startup that was founded in 1984. He has written a memoir called Dawn of the New Everything about his life leading up to and during his transition from a country hippie hacker to a over-stressed Silicon Valley CEO.

Lanier was inspired by painters like Hieronymus Bosch, musical instruments like the Theramin, mathematics, electronics, Ivan Sutherland’s pioneering work with the first virtual world head mounted displays, and more. He also wanted to transcend his social insecurities and anxieties to connect creating shared social VR spaces. VPL Research pioneered the commercial ‘Eyephone’ virtual reality head mounted display with tracking, haptic gloves, motion capture suits, 3D audio, and a cutting-edge virtual programming language. He was inspired by jazz to create technology that could enable mutual improvisation of communication and expression in what would feel like a shared dream in a waking state.

I had a chance to catch up with Lanier in Seattle, Washington on his book tour for Dawn of the New Everything, where we talked about highlights of his journey into VR, musical instruments as haptic devices, the tongue as an input device, and the body’s ability to embody a variety of different animal avatars.

He also shared some of his thoughts on why he thinks artificial intelligence is a fake construct as long as the focus is on AI as a super intelligent parasitic entity rather than merely a tool for humans. He shared some cautionary reflections on the dangers of the advertising-driven business models of Facebook, Google, and Twitter that are creating “massive behavior modification empires.” Lanier is a super humble guy, and his memoir is an interesting mix of impressionistic memories and reflections mixed in with technical deep dives and fifty-two definitions of virtual reality that explores the range of applications, metaphors, and unique affordances of this new medium.

Dawn of the New Everything is a fascinating story that captures a key turning point in the history of VR, and is packed with some deep insights and visions for what’s possible from someone who is still madly in love and inspired by this new medium.