At CES 2014, we sit down with Next3D co-founders David Cole and D.J. Roller who are acting on what I’d wager everyone involved with VR has thought about at some point—live virtual reality sports. Next3D has created a platform called FULL-COURT for broadcasting live sports, up to 4k resolution, with a wide field of view that allows you to look around the action as though you were really there using the Oculus Rift.

Cole and Roller pulled out an Oculus Rift HD prototype at our meeting to demo their FULL-COURT system. It all starts with a camera rig to shoot the scene in stereoscopic 3D with a 179 degree field of view. This includes binaural audio which sounds significantly more life-like than standard stereo. Cole stresses that the scene is specially calibrated to be orthogonality accurate,  preserving maximum immersion. 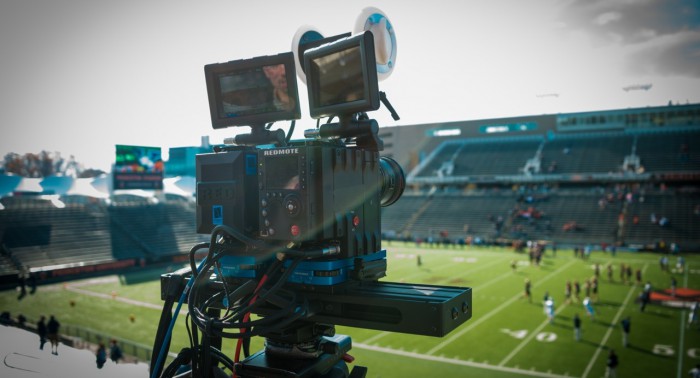 Beyond the recording rig, Next3D’s secret sauce is their encoder and decoder. The encoder allows live broadcast of a 4k stereoscopic video stream while the decoder can process that data in real time for display on the Oculus Rift. Cole told me that if there was a 4k Oculus Rift today, FULL-COURT could play full resolution live video on it at 60FPS.

Inside the HD Rift prototype we were treated, quite literally, with a full court scene before our eyes. We saw recorded video of a football game, wherein you could look left and right across the entire field and watch the action as though you were sitting in the stands. We also saw two basketball players from the sidelines of a street court and a boxer up close in a gym. All were running at a smooth 60 FPS with headtracking.

The basketball scene was my favorite—the immersiveness of the orthogonally accurate scene combined with the frighteningly natural binaural sound of the ball hitting the pavement, hoop, and backboard, impressively convinced my senses that I was somewhere else.

Though the rig doesn’t shoot in 360 (for the purpose of saving on additional broadcast streams, which Cole says are very expensive), the background can be stitched into the live scene from a photograph, CGI scene, or a low-framerate video of the scene to fill in that space.

Cole and Roller are spending their time pitching FULL-COURT to broadcasters to build interest in the technology. It’s a challenging time for new broadcast tech, given the recent mishap with 3D TV. None the less, Cole and Roller are confident about the possibilities of their technology. Cole told us that in a recent meeting, after trying FULL-Court, one exec said “I think I know how radio felt when TV showed up.”